When hydration matters (so much) when you have an ileostomy

Having an ileostomy makes it much harder to stay well hydrated. An average person loses around 2.5 litres of fluid a day (through sweat, urine, breath and faeces). However, someone with an ileostomy loses an additional 800-1000ml per day on top. That’s a whole extra litre of fluid loss.

I should know how hard it is. I have an ileostomy; and one which isn’t especially well behaved either. I have pretty high output (I estimate about 1200-1500ml a day, although to be fair I’ve never actually measured it!) and I feel like I’m constantly chasing my hydration. It’s become a bit of a standing joke that I always have a drinks bottle with me – even on a 10 minute car journey or a short walk round the shops – it’s glued to my side. I’ve become an expert in which bottles don’t leak in my handbag and which shape fits best into my car cup holder. I’m also a runner and I have an ‘extensive’ collection of hydration backpacks of varying shapes and sizes. Some women are obsessed with shoes... I’m obsessed with hydration backpacks.
But without such a vigilant approach to my fluid intake, I know I’d suffer and be unable to live the active life that I lead. Experience has taught me that I can’t take any short cuts either. My hydration is borderline almost all of the time and it doesn’t take much to push me over the edge. A day in an air conditioned office and I’m really dehydrated the following day. A dose of flu had me in hospital requiring IV fluids when someone without a stoma could have probably just thrown it off.. and I don’t drink alcohol because I know that even a small amount will dehydrate me further and frankly I’ve had enough of feeling sick. It’s really not an issue it’s just a choice I make. My husband sometimes fills my wine glass with electrolyte fluid as a joke.
I’ve had my stoma for six years now and it took me at least 2 of those years to really get to grips with my hydration needs and learn some strategies which worked for me.

Like many new stoma patients, my surgeon advised me to drink Lucozade Sport – to replace lost electrolytes and help my body absorb sodium - but I knew from my sport science training that there had to be a better option. A drink like that would just be sugary, make me fat and rot my teeth. A close inspection of the label confirmed my concerns... a high level of sugar and a relatively low level of electrolytes. I knew there was a better solution.

Interestingly as a running coach (prior to my stoma surgery) I’d always recommended marathon runners drink 400ml of Dioralyte (an oral rehydration solution used to treat fluid losses through illness) the night before a race to help their bodies store fluid and electrolytes. And it worked a treat. They were better hydrated ahead of their race and usually ran much better than when drinking water alone.

I think people view Dioralyte as a medicine for the sick, when in fact it can have a place in day to day hydration strategies for everyone as well as those with a stoma. My husband (who doesn’t have a stoma) uses it if he’s a bit hungover and my running buddies use it to help them rehydrate after a long run or hard race (they don’t have stomas either).
Okay so the taste takes a bit of getting used to, but it does the job. In 2013 I ran a 100 mile stage race in the Himalayas – with high temperatures, extreme running and high altitude it was a guaranteed route to dehydration. I was the first person ever to take part with an ileostomy and the race Doctor (who was a gastroenterologist from a Delhi hospital) was amazed and said he never thought he’d see the day when someone with a stoma successfully completed it. But without such a robust hydration strategy and use of oral rehydration solutions (and they are sold extensively in India!) I know it never would have been possible. 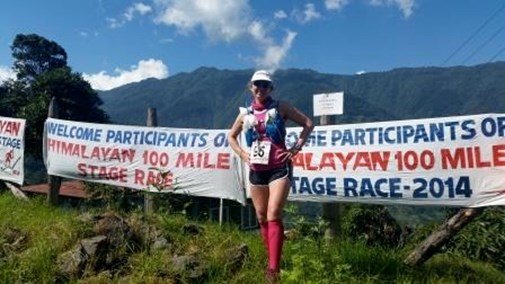 So yes I might be a bit obsessed with hydration, but it keeps me healthy, out of hospital and able to do crazy running events.

If you have an ileostomy it’s very likely you’re a bit ‘under hydrated’. You may not realise it but those feelings of fatigue, grogginess and a headache may well be linked to not drinking enough. It takes some experimentation and a dedicated approach, but once you get on top of it, you’ll find you feel much more energised and healthy.