Crohn's Disease lives with me

Crohn's Disease has lived with me for as long as I can remember. Being in hospital as a child was no fun, it was 1969 and looking back it was very upsetting being away from my family with doctors and nurses poking and prodding and scratching their heads. I was in isolation for 2 weeks as they didn't know what was wrong with me. My Mum and Dad had to wear gowns and masks to come into my cubicle but my little brother wasn't allowed, he had to wave through the glass. I remember the pain and sickness, the disgusting Galactomin I had to have instead of milk as they thought I was lactose intolerant and crying for my Mum at night. I hated hospital. To this day you will only get me there if it's really urgent. 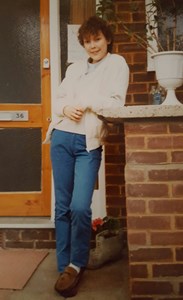 I missed a lot of school, got bullied, became a loner. I hated school. As I grew up I had fewer good days, I started to get arthritis when I was 15 and spent some time in a wheelchair. The steroid treatment I had meant I ballooned but it got the arthritis under control. I hated looking in the mirror. I went completely the other way the next year losing so much weight I was always cold and permanently wore a jumper and scarf. I had erythema nodosum, very painful fluid lumps, on my legs and arms which made even getting dressed a challenge.

At 17 I was told I should prepare for the fact that surgery was inevitable as I had lost so much weight and was malnourished. I would start to eat and I would have to run to the loo, my food was always cold by the time I finished it. I was in constant pain and had exhausted the steroid tablets, enemas and other medicines to no avail. I used to plan a trip out of the house like a military operation, toilet roll, wipes, spare clothes, pain killers, more toilet roll. I knew where every loo was and a rare shopping trip was planned toilet by toilet - not shop by shop. At 18 it was impossible to put the surgery off any longer. I was put on a feed and had my colon taken out which worked for 5 years until the Crohn's came back with a vengeance. It started with an abscess in my right buttock which was drained - 3 times - I had a hole in my cheek like a money box! When it kept filling up they decided to investigate and found my intestines were so ulcerated and thin they had split and poo was traveling through my body. It was decided an ileostomy was the way forward, I was offered a temporary one to rest my bowel but opted for permanent as I was so fed up with the pain. 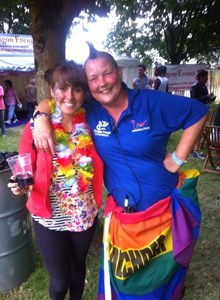 Nowadays Crohn's still lives with me but on my terms. I am fairly pain free unless I eat something like too much fruit or vegetables. I can enjoy my food now. I have so much more freedom; before my life was governed by hospital appointments, investigations and tests. If l want to go shopping now I need to remember keys and phone - I keep loo roll in the car along with baby wipes but that's more for my granddaughters than me. With careful consideration nothing is out of reach now. I can go out for a meal, go swimming or drive for miles with hardly a thought to Crohn's Disease.

Life does take some adjustment but that's no different to me needing glasses now - I keep forgetting I have them so must adjust. I know I am extremely lucky, I have an excellent support network who get me through the days when I am exhausted because I need my B12 jab or the arthritis is particularly painful. I know there are plenty of people who are just starting their journey or struggling to come to terms with their diagnosis. I believe that using resources like me+™ are invaluable for providing support, advice and information. I wish I could have had something like this when I was younger, I honestly think it would have made my journey easier. That's why I want to share it, to help others realise that for every dark day there is a sunny one. There is always a friendly ear to listen to you. Reach out and find my hand.