My experience living with IBD

Hello and thank you for taking the time to read this. My experience living with IBD began in January 2017 when I started symptoms of a stomach bug. There were a lot of bugs and viruses going about and at first I thought that’s all it was. After seven days things got dramatically worse. I started waking through the night every hour to use the bathroom, I was bleeding and I was in a lot of pain. The following day I went to A & E and they suggested that I could have Ulcerative Colitis or Crohns, but it was probably a stomach bug so they took no further action at that time. They said for me to continue eating a balanced diet and hopefully it would pass. I spent the following two weeks cramming myself full of Imodium® and adjusting my eating times to try to avoid an ‘accident’. I was constantly thinking of where the nearest toilet was and terrified of long car journeys. Throughout this time I had worsening symptoms, weight loss and two further visits to A & E. I was finally admitted to hospital after blood tests showed high levels of inflammation.

Soon after admission to hospital a sigmoidoscopy revealed severe ulcerations in keeping with that of Crohn’s or Ulcerative Colitis and I was started on several immunosuppressive treatments including steroids and a form of biologic therapy called Infliximab. It seemed that any time I turned in my bed or made any significant movements I needed the bathroom urgently. I found myself trying to lie still as much as possible afraid to move because I’d need the bathroom. Treatment seemed to start to take some positive effect and after a couple of weeks I was allowed out of hospital.

Although I was glad to get home, I came home with a massive bag full of drugs. It was quite a daunting thought that I was going to have to take these drugs for the rest of my life and still my bowel movements were nowhere near what I would have considered a normal frequency or healthy level of urgency. Still I was trying to get my life back to normal and I tried to remain positive about things.

I knew things could always be worse and unfortunately I was right. My health continued to deteriorate and I ended up back in hospital again with a very high temperature. I had sepsis, flu, c diff and I’d lost 4 stone in weight. I couldn’t recognise my own reflection, a broken and frail looking person stood in my place in the mirror. I knew things were bad but I didn’t know it at the time, I was dying. My temperature hit 42 degrees I was confused, disorientated and unable to communicate properly. I thought I had a stroke or brain damage. A brain scan showed no damage but this is where the surgeons had to step in and perform an emergency ileostomy. This is something I had fought so hard to avoid, but vanity was out the window when it came to survival. 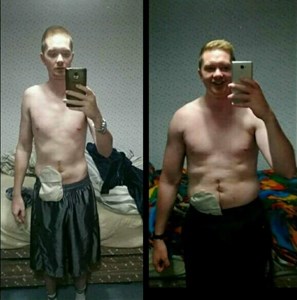 After surgery my appetite returned, I started to get proper sleep, I could see my life coming back. Very quickly I was allowed home and I was taken off all medication. No more drugs. I had control of myself again. After 6 weeks of being at home I started some light physical training and built it up slowly. 3 months after surgery I had all of my weight back and I was getting stronger. After 6 months I was back kickboxing and playing hockey again. It’s almost as if I don’t have Crohn’s anymore. I have a stoma instead which allows me to chose when to use the bathroom (within reason) and allows me to live the way I used to before Crohn’s came into my life. I appreciate the small things in life a lot more and I have a new found desire to LIVE.