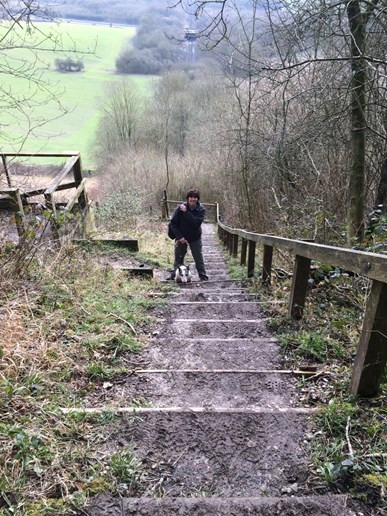 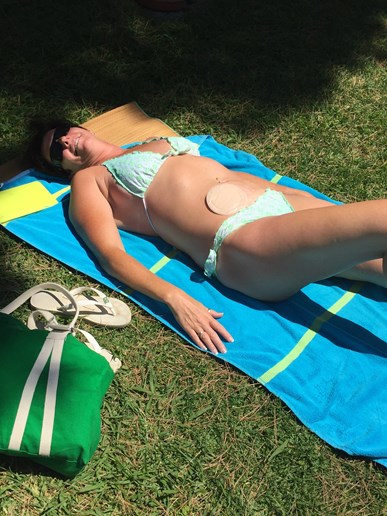 How running helped me re-build my body confidence...

When I was only five weeks old, as a tiny baby, I had bowel surgery to repair a dual rectum. I was left with a considerable scar to my stomach. The scar runs from my pubic bone to just above my belly button. It is an inch wide with the stitches each side across my stomach.

But the scar was only part of the problem. I had ongoing continence problems as I grew up and would often have accidents which really affected my self-esteem. I was an exceptionally timid child, hiding behind my mum’s skirt if people spoke to me and hating being the centre of attention.

Throughout my teens I did a lot of comfort eating and after leaving school I put on two stone. Not only did I have a huge scar running down my belly, but I felt overweight and unhappy.

But after having my children at the age of 30 I decided that I didn’t want to be one of the fat mums in the playground, so I started running. I was surprised that it came fairly naturally to me and I was good at it. It was a real turning point. My confidence started to increase and I found that I started to really enjoy it. So I entered the London Marathon. But there was a problem. Having a weak sphincter and running did not go well together.

The accidents got worse and worse. I would take a bum bag with tissue, wipes and spare knickers out on a run. I was taking so much Imodium that it stopped being effective. My running buddies would insist on waiting for me or giving me a lift home when I just wanted them to leave me to walk home alone. It was mortifying, humiliating and depressing.

But despite that I did manage to run the London Marathon in 1997. It took 10 Imodium and 2 codeine but I finished in a very respectable 4 hours 7 minutes. It was a fantastic feeling and I was incredibly proud. But the continence problem was still there and I knew I had to do something about it.

I eventually decided to have corrective surgery, but the first operation didn’t work out well. After six months I went for a second opinion and had another sphincter repair with a temporary ileostomy. My first experience of a stoma nurse was not the best. She showed me a few bags and asked which one I would like. All I could think was, ‘I don’t like any of them’.

After coming home from the operation I felt so unattractive. At first I would not take my children swimming and would sit on the side while my mum went in with them. I didn’t take them swimming for a year.

Then one of my friends took me on a spa day. This was a massive turning point because I went in the sauna, steam room and swimming pool and, to my amazement, the bag stayed attached. Suddenly I started to realise that maybe life with a bag wasn’t as restricted as I had thought.

My husband was always supportive and still found me attractive. He was never put off at all by my ileostomy. But no matter what he said or did I still felt so unattractive and I was put off by the crackling of the bag during intimate moments. I used to say "it sounds like I’ve got a carrier bag stuck to my stomach". But no matter how many times someone tells you you’re attractive, you have to feel it from within. You have to believe it yourself and build up your own body confidence.

After three years I decided to have a permanent colostomy and I’ve never looked back. I managed to get fit again after that last operation and now do long distance cycling events, running, triathlons, obstacle course races and all sorts of other sporty things!

I think the key is to find something you enjoy that makes you feel good. As I’ve become older I don’t worry so much about what other people think. I now feel the most confident I have ever felt. Running has had a huge part to play in helping me feel more confident in how my body looks and how it works. I am finally happy with my weight and my body. It’s not always been easy, but I truly believe what doesn’t kill you makes you stronger.