On top of the world! (Well, Scotland!)

I have always enjoyed getting out into the Scottish Highlands for a stroll in the hills. I have tackled many walks and scrambles over the last 20+ years in all different weather conditions.

In December 2010 due to bowel cancer I ended up with a stoma (urostomy) and thought that getting back into hillwalking would be difficult. I took it easy getting fit again and it was well over a year and a half before I thought that I was fit enough. My first post-stoma hill walk was with my 17-Year-old son up Ben Ledi (879M) just north of Callander.

I was panicking that the bag would burst and I wouldn’t make up the hill. My son treated me like I was fragile, constantly asking if I was okay. It was a hot sunny day. I wore a stoma support waist band and carried too much water and numerous changes of clothes and bags in case I had a leak. I wore a leg bag and found that I was continually adjusting it as the constant stepping was pulling at the pipe and bag. It was uncomfortable and hard work but I made it up and down. I realized that it wasn’t the stoma that was the problem; I just wasn’t as fit as I used to be.

Looking back on it I was over cautious, worrying about what might happen. Since then I have been up numerous hills and, recently, my longest day post op was a classic walk called the Ring of Steall which is a horseshoe configuration next to Ben Nevis up by Fort William.

It was a 3 hour drive up (time to use the leg bag) followed by an 8km walk up and along 4 Munros (hills over 914m in height) with 3 hills in between. The walk itself took 8 hours, I kept rehydrated and had a couple of lunch stops along the way. The last bit was a plod down the side of the final hill, but I managed a small scree run down about 200m decent, now that’s fun! But the 3-hour drive home wasn’t, after such a long day. 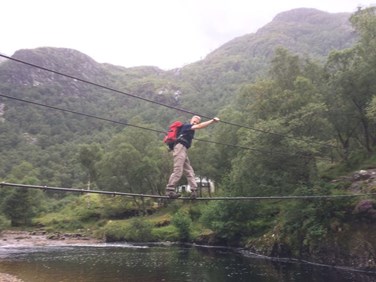 An amazing part of the Ring of Steall is the crossing of the wire bridge. Why was I first over?! This is wet and slippy!

When I go out on the hills nowadays, I put a fresh bag on in the morning and don’t bother with a leg bag. I find that a good waist support is still best for me so I wear special support underwear with a high waistband. I don’t think about my stoma at all when out on the hills, just the environment, views and of course the company of good friends. Whether rain, sun or snow I find that being out on the hills gives me a great freedom from everyday life. 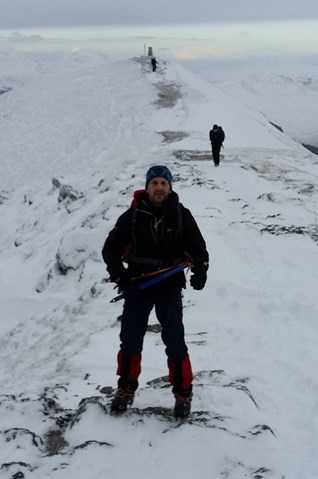 Happy in the snow on top of Ben Vorlich- Lochearnhead

Thinking back to my first walk after the operation, I have realized that I am more relaxed now and take the days as they come. Having a stoma doesn’t stop me from doing the things I want to do. 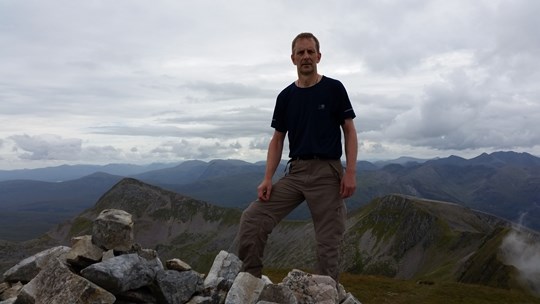 Getting to the top of the final hill of the day is always rewarding, even if I am exhausted!